GLBV Sangha is led by four resident teachers who have exposure to both Asian and Western cultures. They live in Michigan year round and, as English speaking Asians, teach Buddhism in terms readily understood by Westerners, in a way that can be applied to the particular difficulties of our daily lives. Please see of website for biographies of venerable monks. 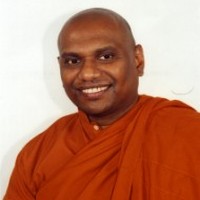 Venerable Brahmanagama Muditha Maha thera, now 66, was conferred with the title “Uthuru Americawe Pradhana Sanghanayaka”, the Chief Prelate of the Sangha Community of North America, since 2017 by the Kotte Sangha Sabha in Sri Lanka. He provided his spiritual services to North American Buddhist communities for nearly for 30 years.

Venerable Brahmanagama Muditha Thero is the founding abbot of the Great Lakes Buddhist Vihara. He is also the abbot of the Hilda Jayewardenaramaya Buddhist Monastery (HJMB), Ottawa since 2008. Venerable Thero is a distinguished scholar and a preacher in Theravada tradition. He is well-known as a skillful meditation instructor to many monks and lay people and has been serving in North America for nearly three decades. Bhante Muditha has been a pioneer in inaugurating many Theravada temples in both USA and Canada 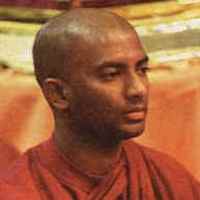 Bhanthe Sankichcha was born in Kandy, Sri Lanka in 1976. He entered the monastic life at the age of 15 in 1991 at Sri Subodhārāma International Monks’ Training Institute in Kandy. In 1996 he received his higher ordination (upasampadā). The same year he moved to Australia where he lived for four years conducting numerous mindfulness programs. In 2001 he was invited to the Great Lakes Buddhist Vihara in Michigan, USA to continue his Dhamma services.

Bhanthe Sankichcha received his BA degree in Psychology from Wayne State University in Detroit, Michigan. He is currently enrolled in a master’s degree in counseling psychology at Oakland University in Michigan, USA. He also serves as the abbot of Great Lakes Buddhist Vihara.
He is engaged in many social and religious services both locally and internationally. As a meditation and a Dhamma teacher, Bhathe Sankichcha helps many people including young and adults providing with Buddhist spiritual counseling.
He has been invited to teach in Malaysia, Singapore, Australia, Canada, and USA.

Bhante Kusala was born in Sri Lanka in 1987. He entered the monastic life at the age of 16 in 2004 at Sri Gangagiri Vihara in south Sri Lanka. In 2007, he received his higher ordination (upasampadā). He did his undergraduate and graduate studies in the University of Peradeniya in Sri Lanka majoring in Pali language. In 2012-13, he moved to Italy and studied cognitive science and engaged in mindfulness based research works at the University of Trento. In 2014, he moved to Cambridge in Massachusetts and pursued a Master's degree from the the Harvard University. In 2017-18, he served as a resident chaplain at the Brigham and Women’s hospital, and at the Dana Farber Cancer Institute. Prior to that, he served as a Spiritual Care person at the Youville Assisted Living Center in Cambridge. He has lectured as a visiting lecturer at the University of Peradeniya, and served as a lecturer at the Sri Lanka International Buddhist Academy, and also served as a tutor in Asgiriya Mahā Vihāra Maha Pirivena, and in the Vision International School in Kandy. He spent two summers at the Dhamma Sukha Meditation Center in Missouri and travelled in Sri Lanka with Bhante Vimalaramsi, and venerable Sister Khema as their translator. Since 2011, he also has been serving as the translator for Ajahn Brahm, and Ajahn Brahmali. He has been invited to teach internationally. Bhante Kusala helps children, youth, and adults with their spiritual counseling needs. In 2018, he was invited to the Great Lakes Buddhist Vihara to continue his dhamma service.
Rev. Tempiritiye Sarananda was born in July 1989 in Ampara district in Sri Lanka. He was ordained as a novice monk in May 2001 at Tempitiya Rajamaha Viharaya in Ampara. Receiving his higher ordination in 2010, Rev. Sarananda joined the Saddhalankara Vidyayathana Monks’ school in Monaragala for his monastic education and training. Moving into Sri Sanghikaramaya temple in Siddhamulla, in Sri Lanka, he was trained under Bhante Muditha for 5 years until he moved to Great Lakes Buddhist Vihara in July 2017.